[edit: This is a repost of the original “Canonball” spelling intentional – to shed some light on the origins of our upcoming PvE quadrant/mode in Delta.. Originally posted 03 October, 2014] 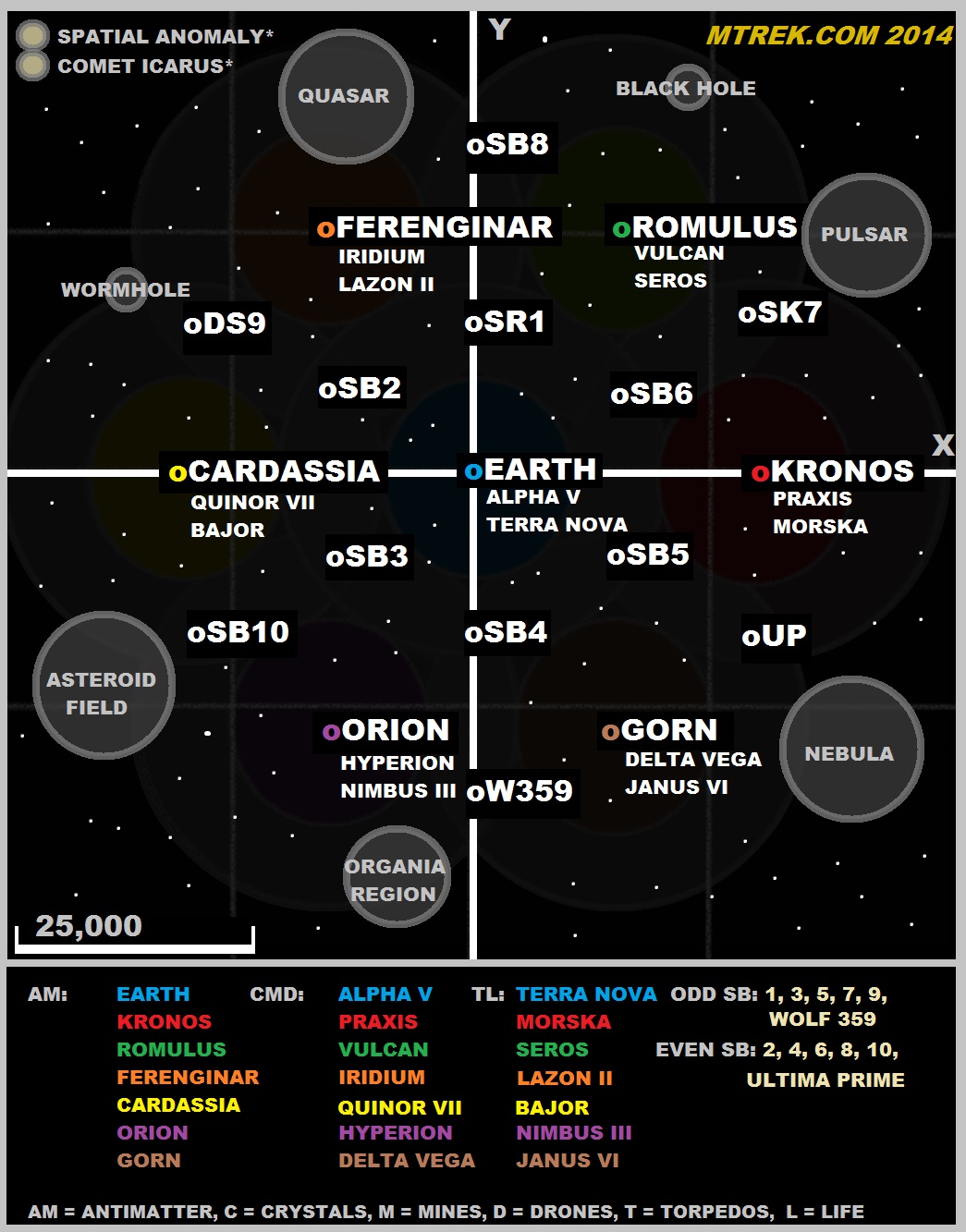 Since I began playing mtrek in the early to mid 90s, the maps haven’t changed much. That’s ok, because “knowing” the entire layout of the game can be important to strategy. For example, if you’re outmatched or torpless and being chased, you can run from sb4 to organia. When you get there, you can evade without fear of being hit since organia deactivates all weapons in the region, and then once you heal a little or regen some cloak, you can make another dash to the nebula, where hopefully you can ditch your pursuers and recover. From there, you might peek out and make a run for rigel. Or you might save at sb1 or try your luck with the wormhole. “Knowing” the layout is actually more than important. In fact, it is central to playing the metagame effectively.

So why did you just scroll past a big goofy map of some quad you’ve never seen, just to hear me ramble on about how important it is for every player to “know” the lay of the land? Well, I’ll tell you.

It’s like this: I’m a Star Trek fan. There. I said it. That’s off my chest now. But don’t get me wrong; I’m not a prosthetic-wearing, Klingon-speaking, convention-going, walking, talking encyclopedia of everything there is to know about the franchise. But I do like Star Trek. I remember enjoying The Original Star Trek series on Saturday mornings when I was a kid. Over my lifetime, I think I’ve also seen most of the movies once or twice. Since tackling the mtrek.com project, I’ve certainly googled a lot of Star Trek-related things in the hopes of not coming up with something silly to add to the game like an X-Wing ship class or whatever.

But even before that, something that has always bugged me, has been… Cardassia. Why the hell is it in Gamma Quadrant? It’s supposed to be on this side of the wormhole. Yeah, I watched some DS-9 too. SO what? But the point is, there are some Glaring deviations from what is considered “canon” in the Star Trek Universe. At the same time, I wouldn’t want to make the game too “ST-correct”, to the detriment of quality gameplay. For example, I think it is perfectly fine that ships can travel warp 14 when the Show would tell you that warp 9.something is the fastest possible speed. Also, if the planets and bases were spaced out “correctly”, it would take weeks/months/years to travel anywhere. Without digressing too far, I’d just like to say that there are things here that just shouldn’t change, because they are part of what makes the game what it is: mtrek.

Now before I start bashing the creators for making careless cartography errors, I should point out that the layout was surprisingly “correct” to what was considered “canon” at the time. Here is an Alpha Quad map, which we are all probably familiar with:

Keep in mind, that there used to only be a “galaxy” in mtrek. There was only what we know of today, as “Alpha”. When it was simply the “galaxy”, what the map was showing, was actually a portion of Alpha and Beta Quads. According to ST canon, the Earth, the centre of Federation space, was somewhat near the border that bisects the two quadrants. And the “explored galaxy” fanned out in all directions from there. Rightly so, since the main characters of the TV show were from Earth, and flying around to explore the galaxy. The key points here, are that One, Earth is in the middle. Two, Klinzhai (aka Kronos) is rightish from there (in Beta). And Three, Romulus is upish from Klinzhai.

A few of you, though I doubt most, will remember this gem from before Sean Breazeal’s 1994 map shown above. The following, is a postscript map dating from the days when the internet was practically never browsed via graphical browser, and PostScript was the “only” way to send graphical files to one another for printing. I certainly had my own copy handy, stapled to a set of the mtrek docs for quick reference while blasting newbs on my VT100 UNIX terminal. At the time this map was downloaded, there was only an Alpha Quad and a Gamma Quad. (I have copies of both) Coincidentally, Gamma was added to the game while ST: Deep Space 9 was airing. :/

It is easier to see here in the PS map, that the lower number bases were arrayed in a fireline of sorts, to protect Federation space along the neutral zones separating Romulus and Klinzhai (bad guys) from Earth (good guys). 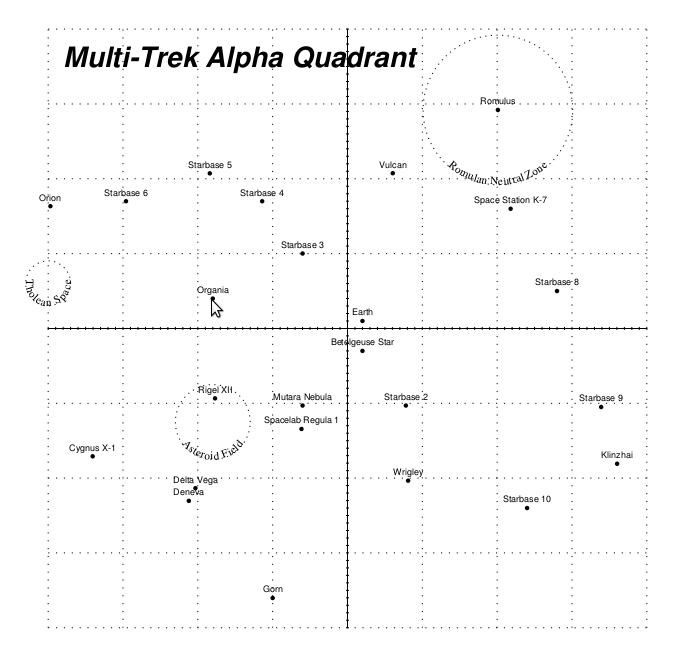 And of course, to cap it off, here’s a 1990 plot rescued from a stat lab by one of the UCSC geeks. I don’t know if there’s an earlier map of the game still in existence, or one without the graffiti, (the art adds some charm, imho) but here you have it: 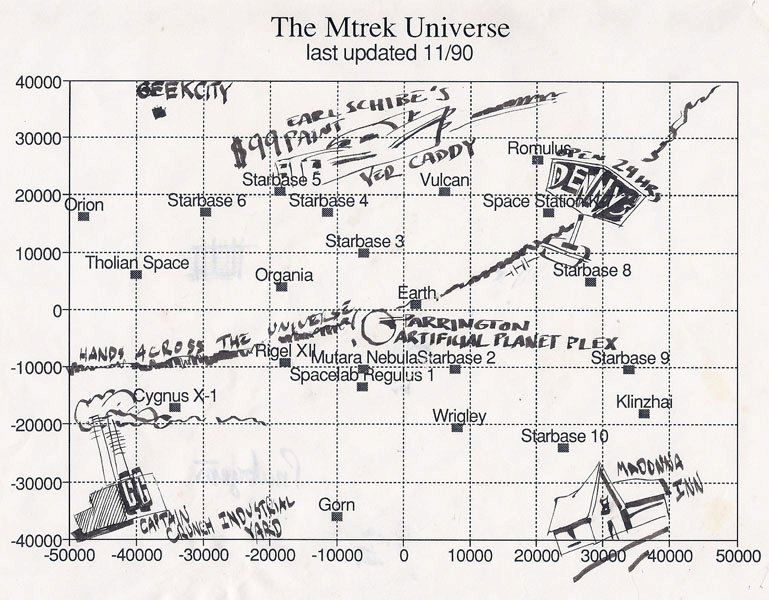 Even older versions of mtrek did not have sbs 7-10, making the fireline more evident. In CLP’s mtrek documentation, he describes the game as a multiplayer “Trek-like” game. Until very recently, I mistakenly took that to mean “Star Trek-like”… Actually, he was saying “Trek-like”, as in, the game is like the game “Trek”. Give it a google some time. Funny how a game called “Multi-Trek” was originally envisioned and written as a multiplayer version of a game called “Trek”. There is also possibly a link to Boeing’s FORTRAN-written “Multi-Trek”… but I won’t go there in this article because that leads us down a long road, one which is paved with speculations, implications, and “maybe”s.

So back to the matter at hand: The big goofy map.

I’ll start off with a short anecdote here:

Nameless Player: Chuck, you can’t pay me enough to fly around Gamma. It’s big, it’s boring, and it’s home to the 2 crappiest ships ever designed for the game.

The biggest problem with the Cardies wasn’t their design. It was their originating point. Cardassia. (which, *sigh* was in Gamma Quadrant) It was simply too much of a PITA to start one, load up crystals at Praxis (a Klingon moon, which inexplicably also happened to be in Gamma Quad) and then pedal on through a series of wormholes to reach Alpha, the only quad with other players. And then because no one really wanted to bother with the cardies, most players never took the time to become exceptionally skilled with them. As a result, players died a little more quickly in those ships, and to complete the cycle of suck, players would lose interest in the ships after wasting 20 minutes to get one going, only to get blasted within 5 minutes of entering Alpha.

(Apologies if it’s too much, but i’m posting this a second time so you don’t have to scroll all the way back up to the top so many times, as I explain the map.)

Some key elements to note:

Depending on your screen brightness, you may or may not see the colored halos around each of the homeworlds. Basically, each homeworld has a zone surrounding it, which alerts ships from that race to intruders of another race. It works exactly like the current Romulus zone. The faint grayish areas are overlappy Neutral Zones.

And well… that’s it. I haven’t touched a single line of code in the game to make anything like ^^^ this happen yet, but in a short blast of creativity, I’ve managed to compile a bunch of random thoughts and musings I’ve been kicking around for years, into something more substantive. This is quite possibly a concept that will never leave the drawing board, but nevertheless, seemed worth sharing.